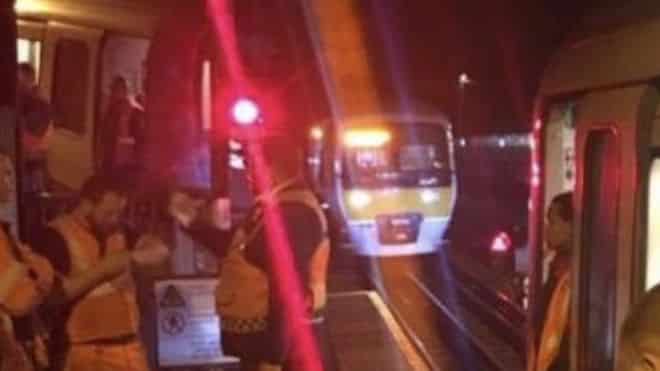 Passengers narrowly avoided a collision when a train travelled the wrong way on a London Underground track.

The Chiltern Railways service stopped a few metres in front of a Tube train at Chalfont and Latimer station in Buckinghamshire.

An image from the scene shows the two just metres apart on the Metropolitan line on Sunday night.

No casualties were reported and the Rail Accident Investigation Branch (RAIB) is investigating.

The train caused damaged to points and parts of the track, according to BBC London Transport and Environment Correspondent Tom Edwards.

The Metropolitan line remains suspended between Rickmansworth and Chesham.

A Transport for London (TfL) spokesman said: “We apologise to customers disrupted by the closure of the Metropolitan line between Chalfont and Latimer and Chesham.

“We are working with Chiltern Railways to determine exactly what happened, and our engineers will repair the railway to return it to service as quickly as possible.”

A Chiltern Railways spokesman said the safety of its customers and staff was top priority.

“We have an excellent safety record and are working with the Rail Accident Investigation Branch to understand the causes of this incident,” he said.

“We apologise for the disruption caused to customers using Chiltern Railways and London Underground services in the area.”