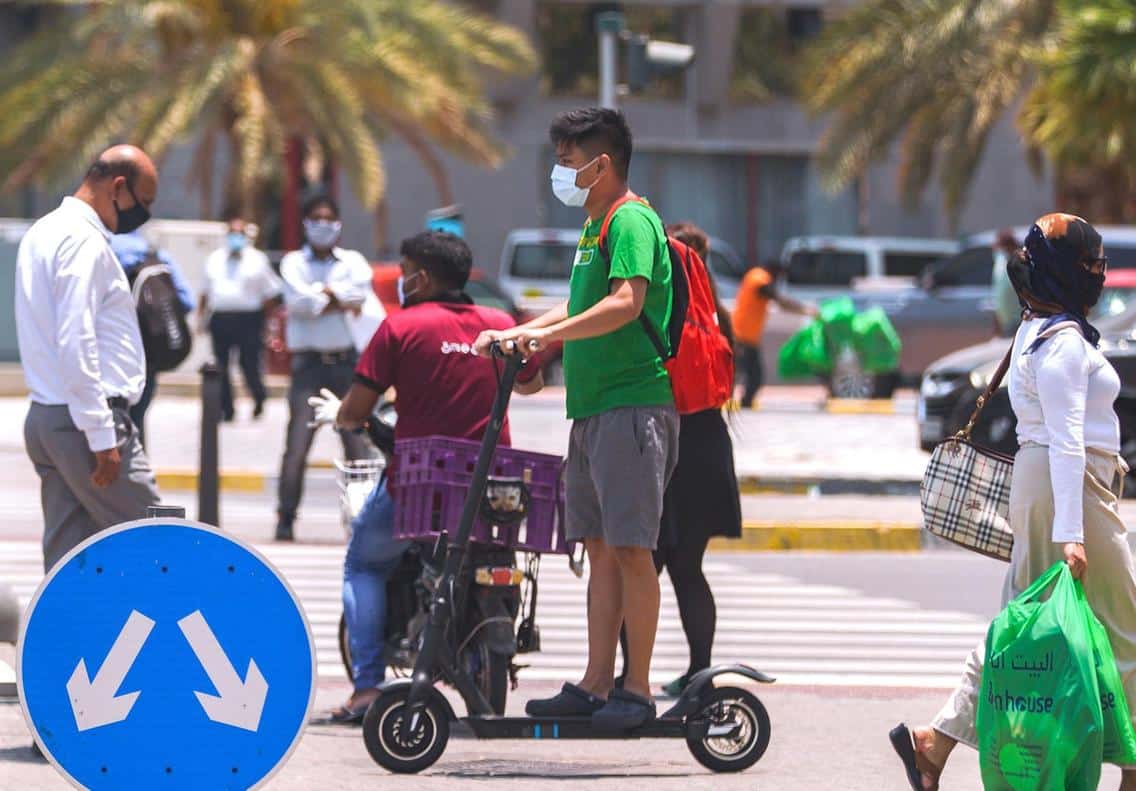 A worker wearing a hard hat walks past a mural in the Gulf emirate. AFP

Authorities in the UAE last month said that people whose residency visas expired during the Covid-19 outbreak would be extended until the end of the year.

The decision was made to help residents and companies amid strict stay-home measures that were put in place to prevent the spread of the coronavirus.

But as residents begin to leave the country on repatriation flights or others remain abroad, unable to return because flights have been grounded and borders closed, questions about visas and sponsorships remain.

People have been keen for more information about their residency status after authorities gave March 1, 2020 as a cut-off date for the visa changes.

Many residents, whose visas were cancelled, worry about overstay fines after they lost jobs because their companies cut back on staff due to the economic effect of the pandemic.

The National spoke to Haider Hussain, partner at Fragomen, an immigration services firm, to explain the current rules.

He said authorities have been proactive as they attempt to provide clarity where possible in a constantly evolving scenario due to the virus.

What happens if my visa expired between March and December?

What about people whose visa expired or was cancelled before March 1?

These residents can stay in the country for three months, beginning May 18, 2020, without incurring fines. This means they can remain until August 18 without paying visa overstay fines. If they find a new job and are sponsored by their employer, they will be issued a residency visa. 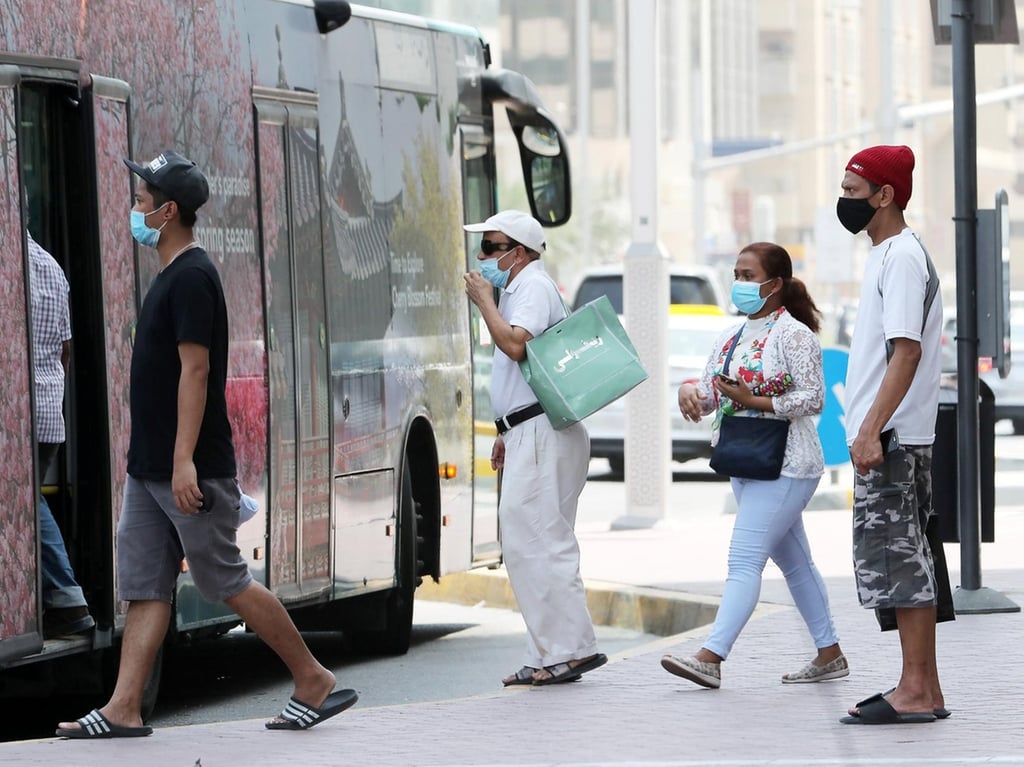 People wearing face masks board a bus in Abu Dhabi as the emirate gradually gets back to business along with the rest of the UAE. Pawan Singh / The National

What happens to residents who have lost their jobs and their employers have cancelled their visa after March 1?

People whose visas were cancelled after March 1 have a 30-day grace period from the date of cancellation. They need to secure a new job to change their sponsorship or leave the UAE within a month or risk incurring fines. The overstay fines are Dh225 on the first day and Dh25 for each subsequent day.

One option is to file for a tourist visa. Although tourist visas remain suspended for people outside the UAE, people within the country can apply for a tourist visa to get immediate relief. This will give them an additional 90 days without being fined.

They can also apply for a seat on a repatriation flights that various countries are organising.

Employers are encouraged to be accommodating and companies are requested to show compassion by delaying or holding visa cancellations until restrictions on travel lift.

Authorities have also been lenient in some cases when companies or individuals request a waiver or reduction on fines. Companies and individuals are assessed on a case-by-case basis. In some instances, employers have covered fines to alleviate pressure on employees.

What happens to the visas for dependent family members or domestic workers?

The same rules apply to dependents.

Residency visas for dependents that expire between March 1 and December 31 will be renewed automatically until the year-end and this includes housemaids and domestic workers.

In case of cancellation, the dependents’ visa must be cancelled first and only then can an employee’s residence permit be cancelled. Dependents too have an option of securing a tourist visa or if the family breadwinner secures fresh employment and gets a new visa, the dependents also then can be sponsored. 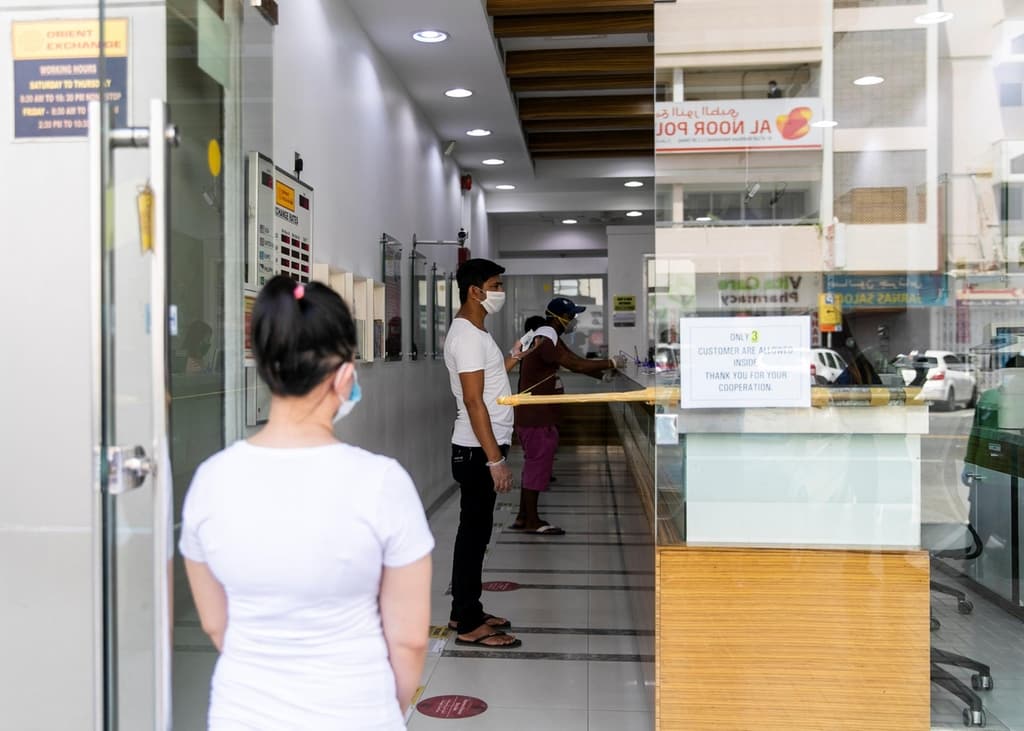 A money exchange house in Satwa, Dubai as residents send remittances home to help families tide over the challenges triggered by the coronavirus outbreak. Reem Mohammed / The National

Can dependent visas be put on hold and not cancelled?

If the person sponsoring others is changing jobs, they can put their dependents’ visas on hold rather than cancelling them. This freezes their status in the system and they cannot exit the country during that time. The sponsoring resident can then cancel their visa, get a new one and then remove the hold on the dependent’s visa. This is for dependents not sponsored by a company but sponsored by a spouse or resident.

The ‘hold’ process was suspended during the stay home restrictions since original documents needed to be submitted but the facility is available now since Amer centres have reopened.

Do you still need to get a medical test?

Regardless of category, for renewal or extension of visas, residents, domestic workers, employees do not require medical tests. It may be required if there is a new entrant into the country, an application would then need to be submitted.

What services are available online and when do you need to go to the Amer centre?

People can check the status of their residency on the Federal Authority for Identity and Citizenship website.

Processing for visas varies between emirates and several services are available online. You may need to visit an Amer centre if original documents must be submitted over the counter.

Several employers and companies have continued to apply online for new visas and for renewals of residence permits due to expire.

At present, there is no clear indication of whether these electronic renewals must be re-endorsed on the passport with a visit to the Amer centre.

With offices moving to 100 per cent staffing this month, there will be a better understanding about whether all extension of visas will be via an e-sticker or if passport must be submitted for re-endorsement of residency permits.

Clarity on this will be important since it could have an impact on people who travel in and out of the UAE as flight services resume.

What happens if my visa is cancelled but I cannot leave the UAE because there are no flights available to my country?

The UAE authorities have been accommodating and supportive where possible depending on each case. Residents should also get in touch with embassies about any processes in place.

How do I check if my visa is valid?

Alternatively, visit this website if you are a Dubai residence permit holder: