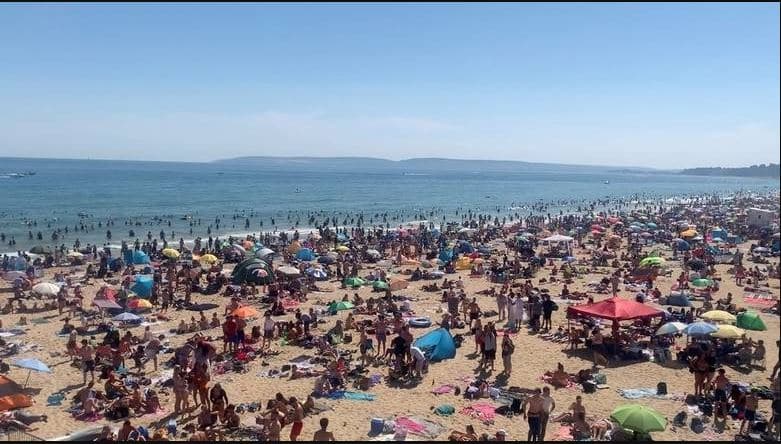 People enjoy the hot weather at the beach, amid the outbreak of the coronavirus disease (COVID-19), in Bournemouth, Britain, June 25, 2020 in this still image obtained from a social media video.

Thousands of people flock to Bournemouth on UK’s hottest day of the year, despite threat of Covid-19 from mass gatherings.

An English seaside resort declared a major incident Thursday after thousands of people flocked to the beach on the hottest day of the year so far, despite the threat of coronavirus.

Temperatures rose to a record 33.3 degrees Celsius (91.94 degrees Fahrenheit) at Heathrow Airport in west London, the Met Office said, a day after highs of 32.6 C saw huge crowds flock to the coast.

But the local authorities in Bournemouth said they were “appalled” at the scenes on its beaches, as the sunny weather saw an influx of thousands of people.

Their arrival resulted in gridlock on the roads, widespread illegal parking, piles of rubbish as well as anti-social behaviour including drunken fights, they said.

Visiting the beach is permitted after a nationwide coronavirus lockdown was eased, but people are still being urged to avoid large crowds, and pubs and restaurants do not open until July 4.

Council leader Vikki Slade said Bournemouth, on the southern English coast, was not ready to receive so many visitors and urged people to stay away.

“The irresponsible behaviour and actions of so many people is just shocking and our services are stretched to the absolute hilt trying to keep everyone safe,” she said.

Declaring a major incident allows the council to deploy additional resources, including police.

Other beaches across Britain were also busy, including Southend-on-Sea, where Magda Bewick was among those soaking up the rays.

“It’s lovely, obviously to have a little sunbathe, and the kids are happy, in and out of the sea,” she told AFP.

She said she had been placed on furlough from her job, “so what else is there to do? I’ve done enough gardening, it gets a bit boring”.

She said the adults were keeping their distance from each other as much as possible, although admitted that many of the children were not: “They don’t understand.”

“Clearly we are still in a public health crisis and such a significant volume of people heading to one area places a further strain on emergency services resources,” he said.

Britain has been hard hit by the global coronavirus outbreak, recording the worst death toll in Europe so far.

Infection rates have fallen significantly, but the health ministry on Thursday recorded another 149 deaths among confirmed cases of Covid-19, bringing the total to 43,230.