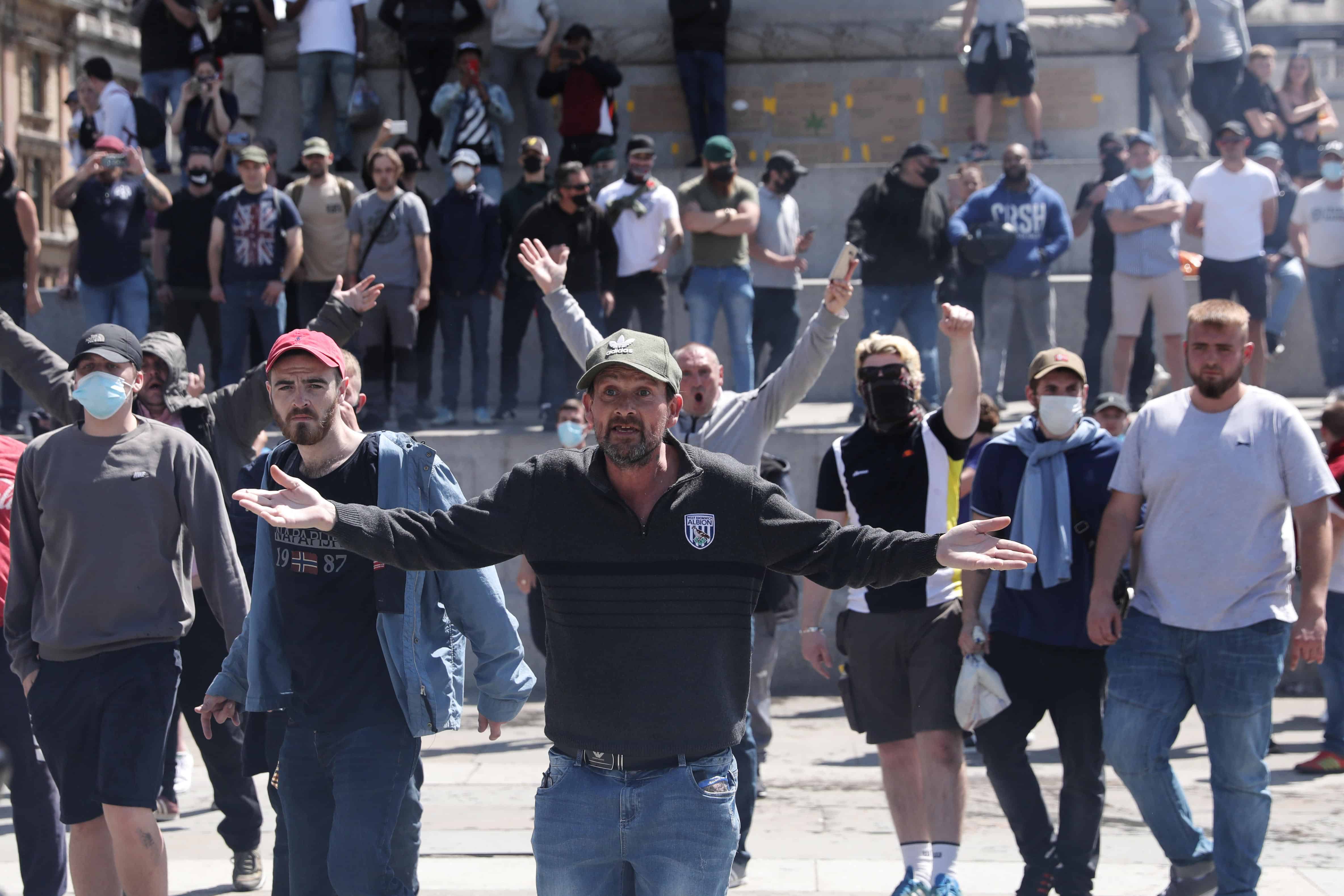 ‘This has potential to get nasty now’

"These protesters barged into the park looking for, I think what it appears, a confrontation."

Sky's @Noel_Phillips witnesses police "desperately" trying to contain a "disorder" in Hyde Park. He says counter-protesters were seen running into the area.https://t.co/e1kyuZJ79K pic.twitter.com/css8LkMtbf

Absolute shame on this man.

Of all the images to emerge over these few testing days I find this one of most abhorrent.

Reporting from clashes in Hyde Park, Sky’s Noel Phillips said 150 to 200 counter-demonstrators ran into the park, with a “convoy of police trying to catch up with them”.

“It appears they’re intent on causing chaos and havoc,” he said.

Phillips said there was a “small altercation” when the demonstrators entered the park as they fought with a young person.

“You can hear a lot of shouting as the police are desperately trying to avoid them coming face to face”.

Officers tried to keep the protesters who were in the park separated, Phillips said, adding they were “not necessarily Black Lives Matters protesters”.

Reporting from Hyde Park, Sky’s Noel Phillips said: “Police are desperately trying to contain the situation. These are scenes the PM and authorities won’t want to be played out national TV.

“These scenes show that police are struggling to contain the situation across central London.

“Police are deeply concerned about what might happen. This could get ugly.”

‘This has potential to get nasty now’

Tensions are rising at protests in central London as counter-protesters - who say they are there to protect statues during Black Lives Matter protests - clash with police.

Bottles and smoke bombs have been thrown at officers - follow live: https://t.co/e1kyuZJ79K pic.twitter.com/Fw2UKVCDLG

“Although police are saying it is an absolute cordon, they are allowing counter-protesters to get through to the other side.

“The different pockets of protesters have been trying to get to different locations and inevitably, at certain points, and certain areas where there is a police cordon, they are meeting and they are clashing.”

He added: “It’s very volatile around here – there have been a number of violent incidents.

“This has the potential to get quite nasty”. 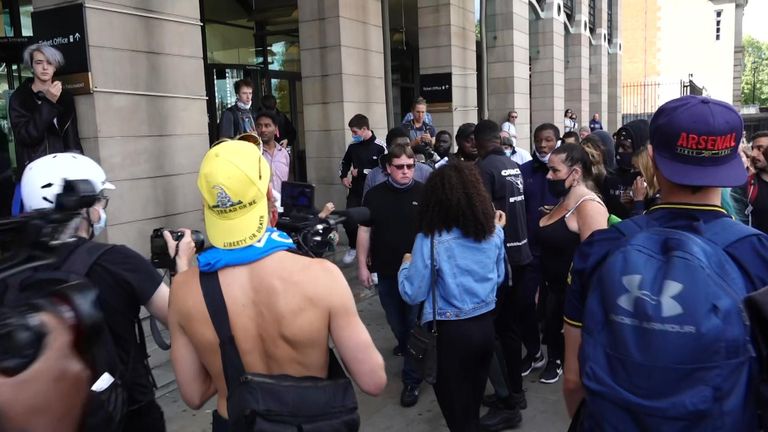 Reporting from Westminster Bridge, Sky’s Mark White said: “We’ve had several pockets of violent disorder over the past couple of hours – both in Whitehall and Parliament Square and also on Westminster Bridge and Trafalgar Square.

“It hasn’t been widespread and sustained over many hours – rather short-lived clashes. But still, police have made the decision to throw this sterile cordon around the scenes where the disorder has broken out over the last couple of hours. I have never seen anything like it.”

Hundreds of mostly white men converged on Parliament Square after far-right groups, including Britain First, called on supporters to guard the statues. 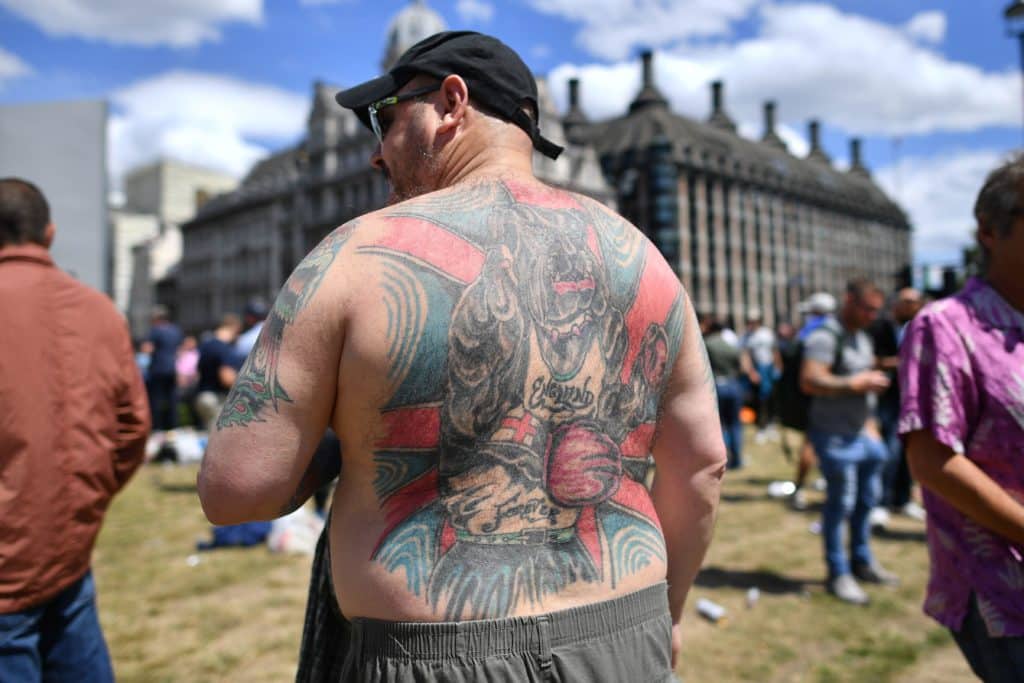 This is totally unacceptable. We will not tolerate attacks on our police and perpetrators will feel the full force of the law.

It is clear that far right groups are causing violence and disorder in central London, I urge people to stay away. https://t.co/ZImnvmfWeL

WATCH: Counter-protesters have been involved in violent clashes with police

In Bristol a man briefly climbed on top of the plinth where slave trader Edward Colston’s statue had stood for more than 100 years in until it was torn down last week by supporters of the Black Lives Matter movement.

To a large round of applause and singing, he unfurled a Union flag and waved it around before getting down. 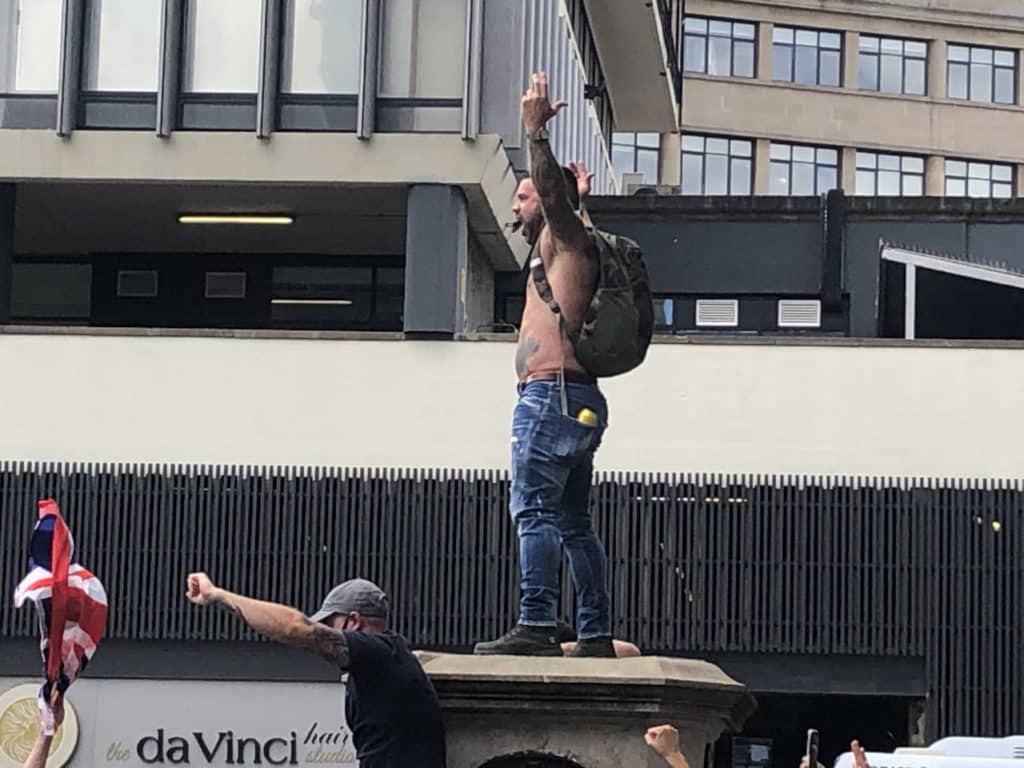 Speaking before the clashes, Paul Golding, leader of far-right Britain First group, said the crowds had turned out to “guard our monuments”. 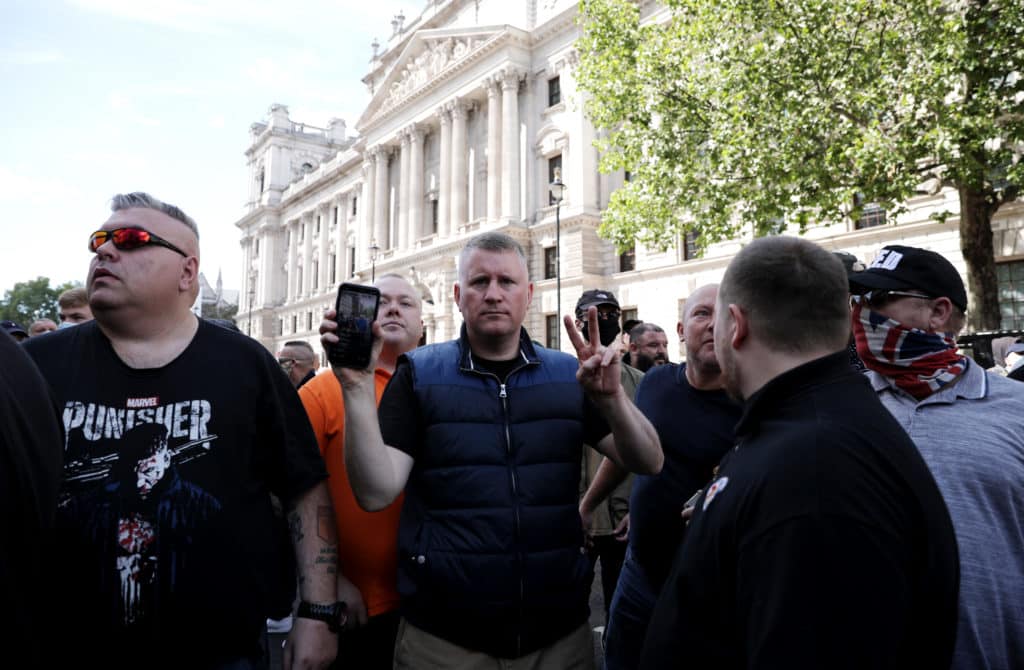 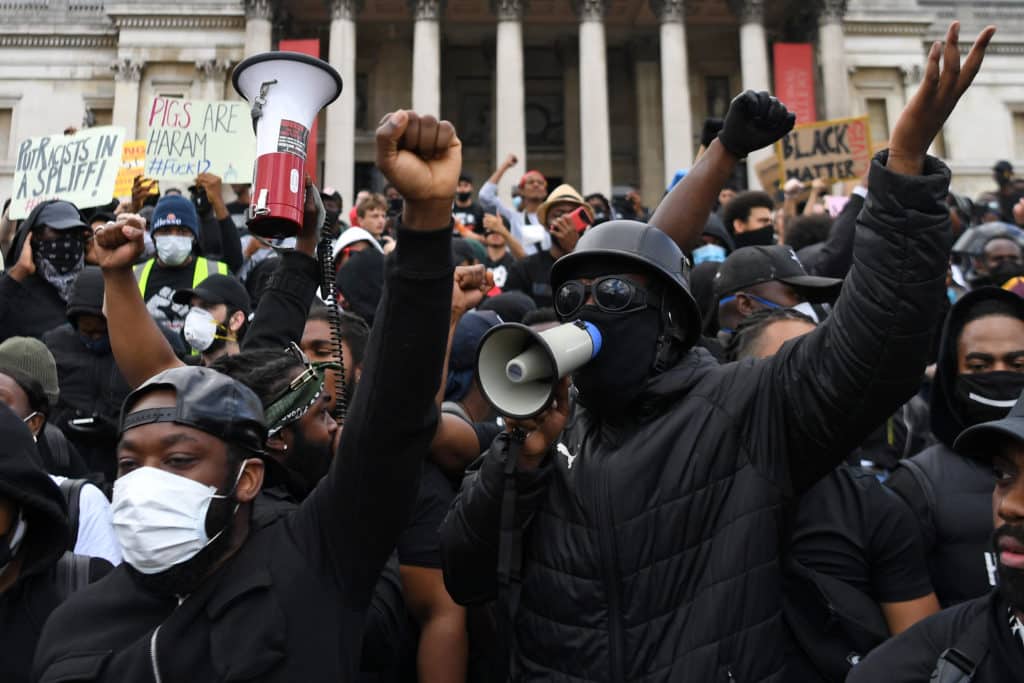 In an attempt to avoid violence police have warned protesters they must be off the streets by 5pm or risk being arrested. 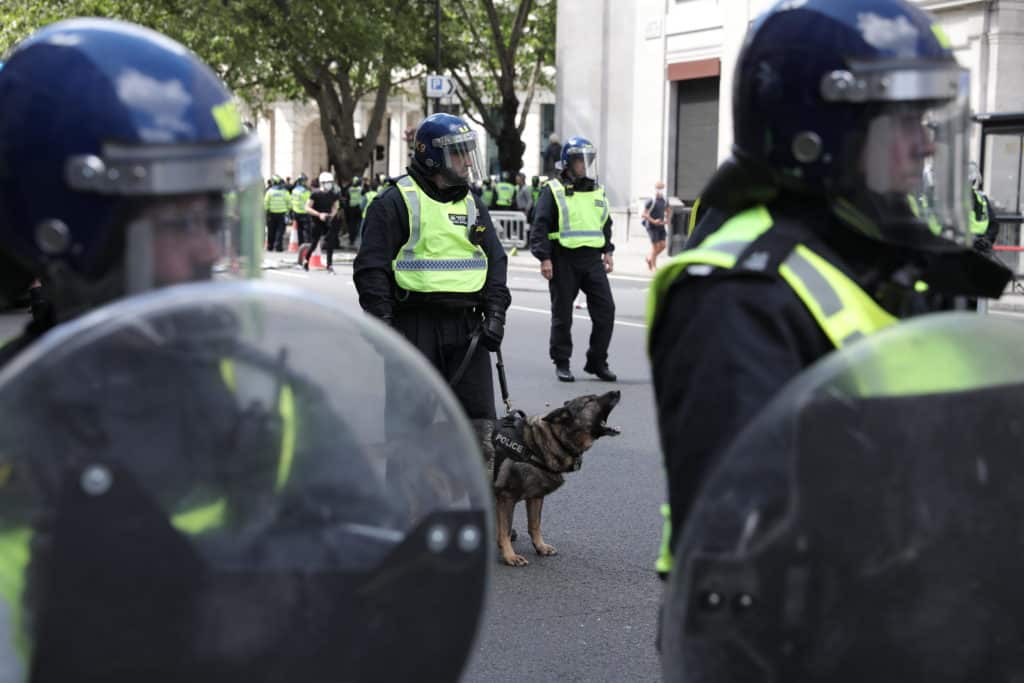 Police officers are blocking all the exits to London’s Parliament Square.

Some demonstrators have jumped a fence into the grounds of Westminster Abbey in order to leave.

A group that clashed with police close to the Cenotaph have now moved and demonstrators are now throwing bottles at officers close to Westminster Bridge. 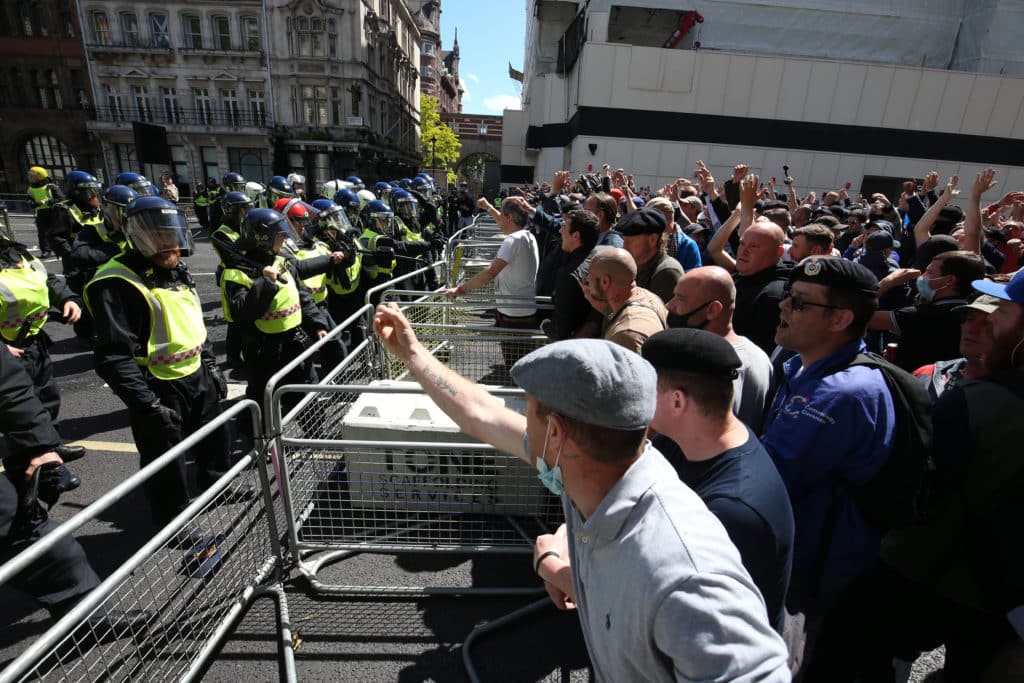 WATCH: Groups claiming to be protecting statues from anti-racism activists clash with police

BREAKING: Police have clash with protesters in central London, where groups say they are protecting statues from anti-racism activists.

Police have formed a barrier to keep back counter-protesters, including members of the far-right, who say they are there to protect statues against Black Lives Matter activists. 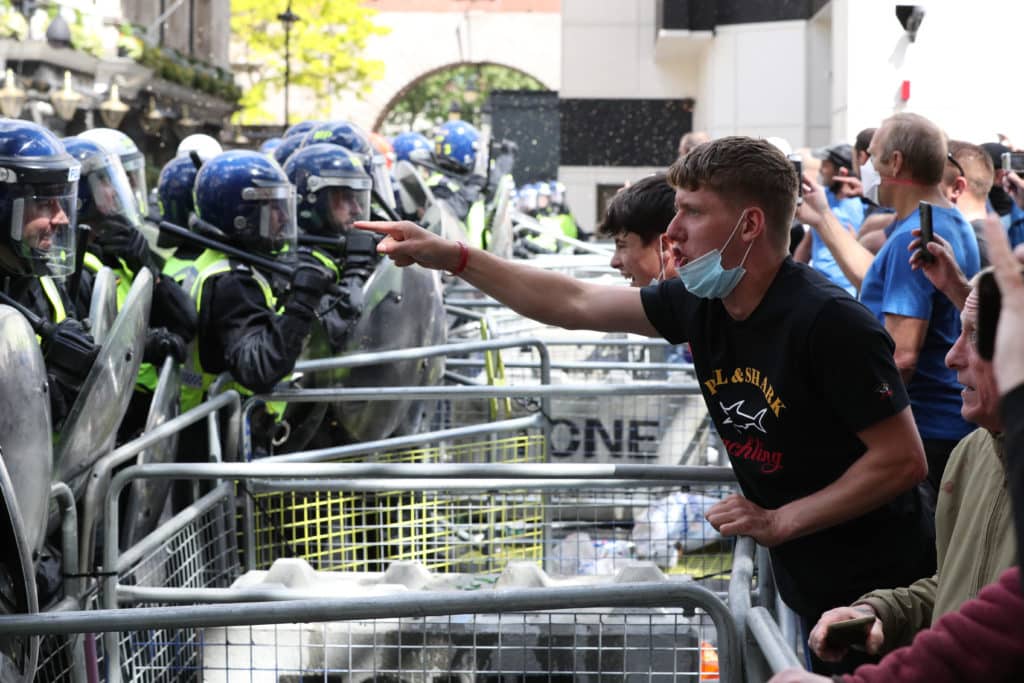 Lines of police are maintaining a divide between anti-racist activists and the other group of protesters in Brighton.

Police at the scene said a gap between the two groups is being maintained to allow both to have their say.

Thousands of protesters from Black Lives Matter have also taken part in a demonstration in Brighton.

There were scuffles when the march went close to the war memorial, where counter-protesters had positioned themselves. 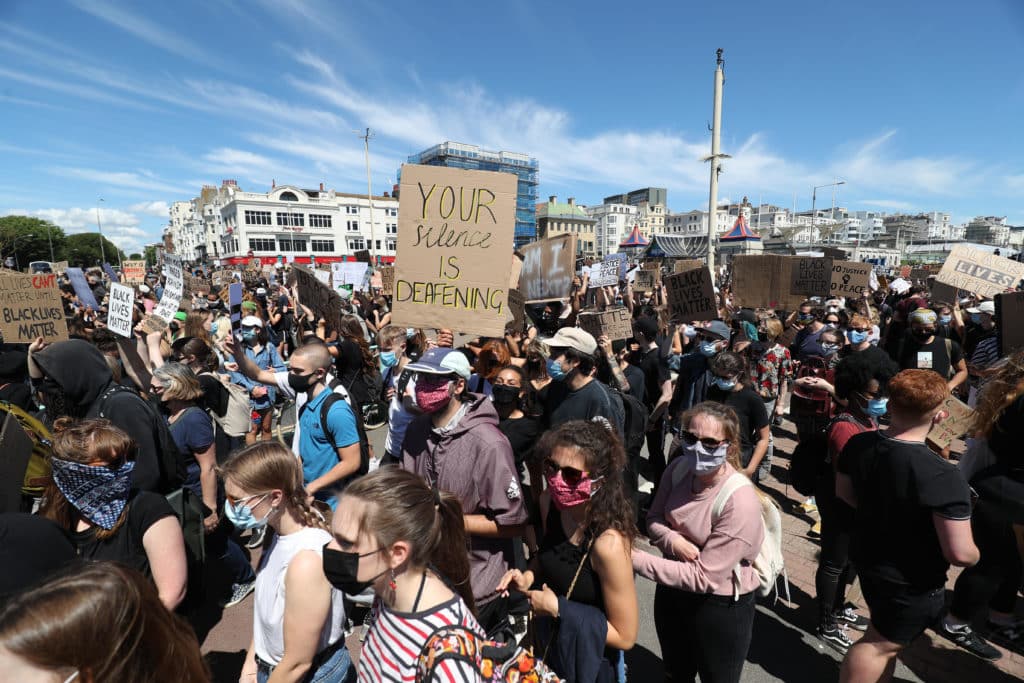 WATCH: ‘I don’t want people to think that they are alone’

"I don't want people to think that they are alone."

A schoolgirl at a Black Lives Matter protest in Reading explains why she is taking part in the demonstration and says she experienced racism at school.

Police are attempting to keep the protest groups apart.

Large groups of counter-protesters have moved to Trafalgar Square, where fireworks were thrown across the crowds.

Police are trying to stop them getting to Hyde Park where a Black Lives Matter demonstration, which has largely been peaceful, is taking place. 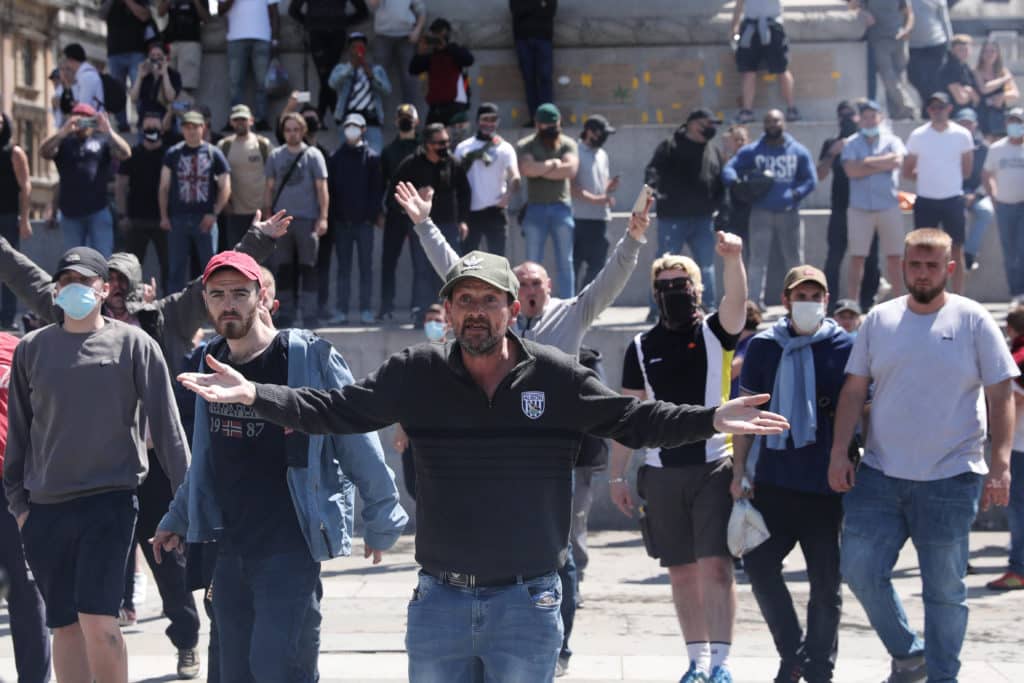 Counter-protesters have gathered around statues in London after several were targeted by Black Lives Matter demonstrators. 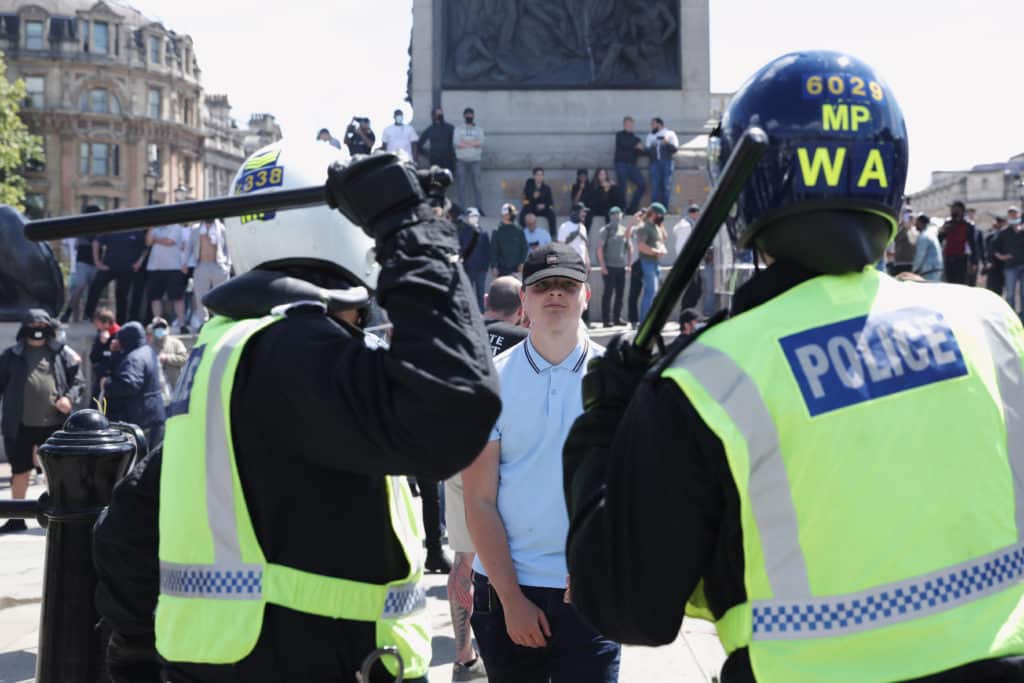 #BLM protestors in Reading raise a fist as the names of Black victims of police brutality are read out. pic.twitter.com/DDMI26Nrdl

Any perpetrators of violence or vandalism should expect to face the full force of the law. Violence towards our police officers will not be tolerated.

Coronavirus remains a threat to us all. Go home to stop the spread of this virus & save lives. https://t.co/HsOx9cgrqD

BREAK Scotland Yard commanders have issued a Section-60 order for today’s central London protests, giving them increased powers to stop and search. A spokesman said: “We have learnt that some people are coming into London to cause harm and are likely to bring weapons with them.” 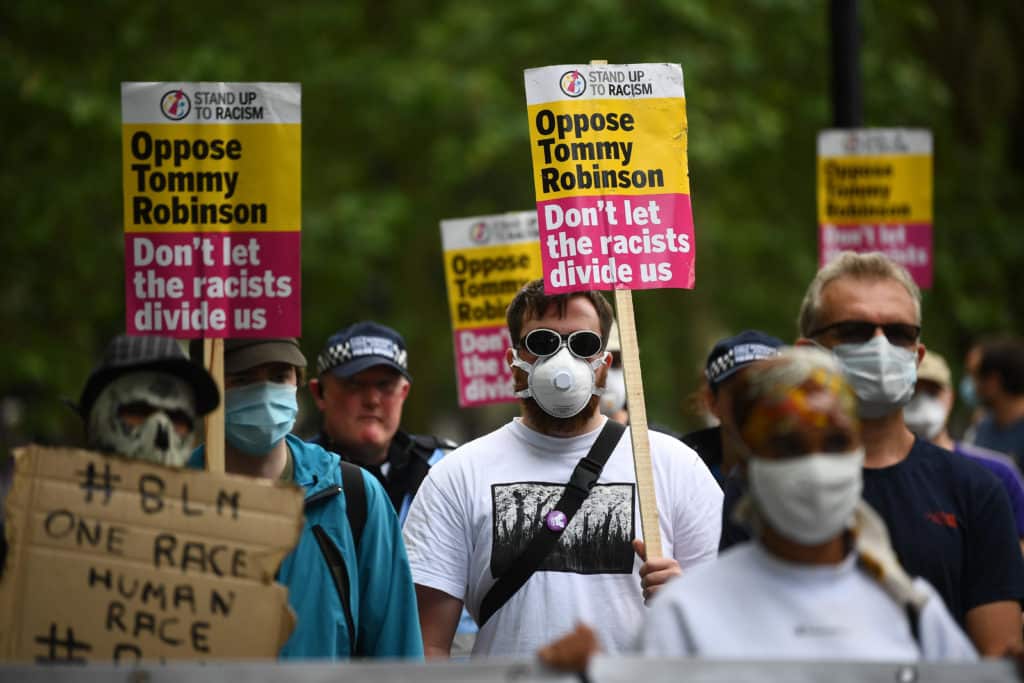 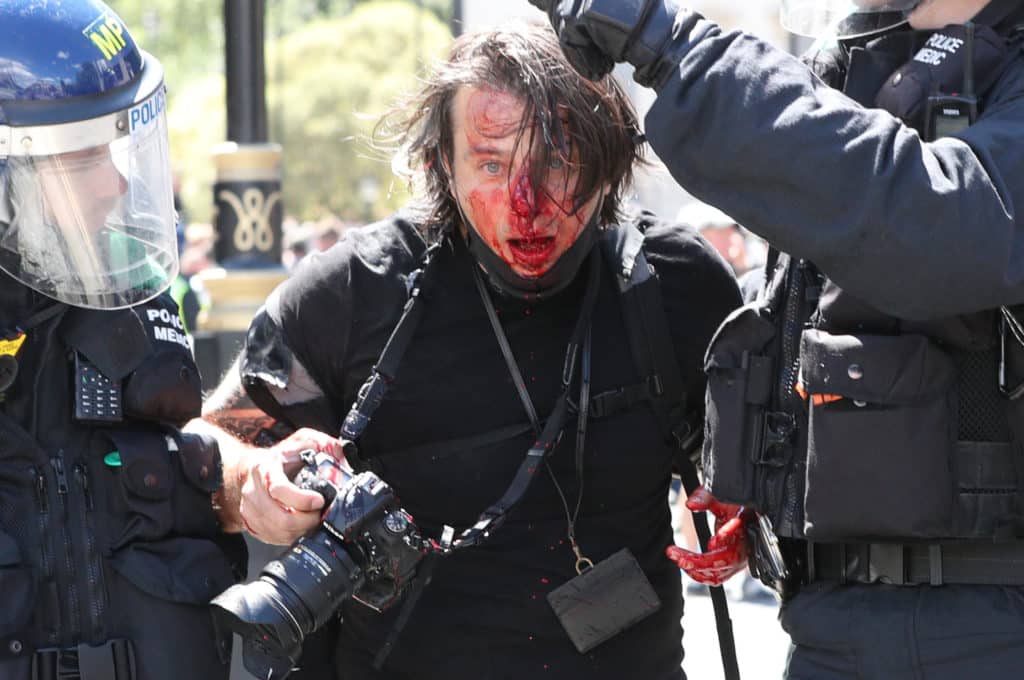 Counter-demonstrators have clashed with police close to Westminster Bridge, with glass bottles thrown towards the officers and their vans.

At least one officer had a baton held up towards the protesters who are chanting “You let your country down”, towards them.

Other protesters in Parliament Square have marched towards the boarded-up monument of Churchill.

Singing Rule Britannia and the national anthem, some had started banging on the sides of the covering. 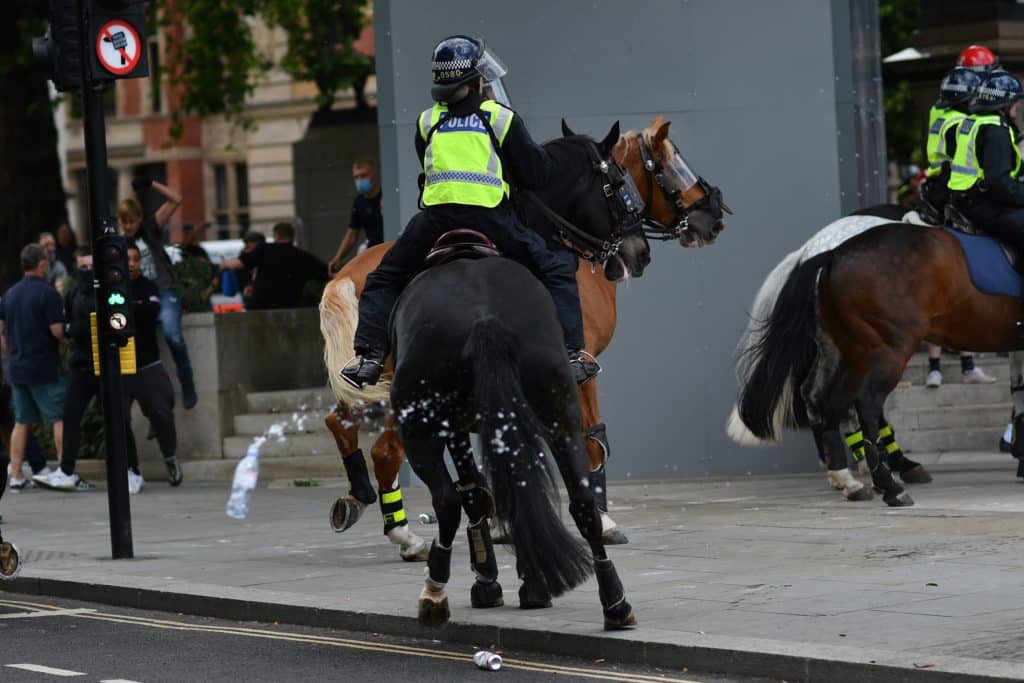 WATCH: Some counter-protesters have been involved in violent scuffles with police near parliament

Recreational Cricket Commencing In the UK from 11th July 2020