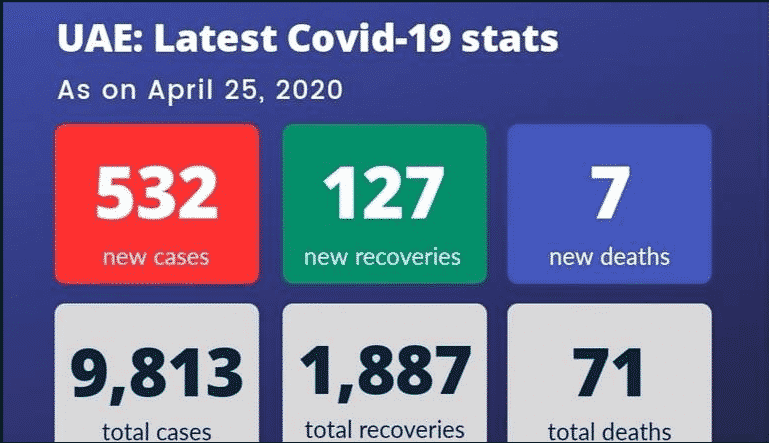 The UAE Ministry of Health and Prevention on Saturday, April 25 announced 532 new cases of the Covid-19 coronavirus, taking the total number of cases in the country to 9,813.

MoHAP also announced 127 new recoveries, taking the total number of recoveries to 1,887 as of April 25.

The ministry condoled the deaths of 7 patients, who tested positive or Covid-19 and died due to complications. The death toll stands at 71 as of April 25.

The tests exceeded the one million mark in the UAE.

Abdul Rahman bin Muhammad Al Owais, Minister of Health and Community Protection, announced that the laboratory tests in the country exceeded the one million. These tests are available to citizens and residents through more than 14 examination centers, as well as hospitals and health centers.

Exchange of food between different homes, as well as the distribution of meals from individuals, is prohibited except through a mass food distribution system, where it can be done under the supervision of charitable societies and relevant government agencies.

The UAE has taken over 100 initiatives over 45 days to combat the Covid-19 coronavirus in the country, both at federal as well as emirate level. After the success of the initial round of the nationwide sterilisation campaign, Dubai on Friday announced an extension of the campaign for another week.

Meanwhile, UAE has also started clinical trials of plasma therapy for treatment of Covid-19. Their effectiveness is being researched, and the UAE is keen to further look into studies and treatments around the world.

In a bid to combat the spread of coronavirus, several precautionary measures were put in place in the UAE, including the #StayHome initiative, a nationwide sanitisation drive, guidelines for proper hygiene in homes and workplaces, among others.

Among the latest steps taken by the UAE government is that all residency visas, entry permits and Emirates IDs will remain valid until the end of 2020.

Abu Dhabi, Dubai, Sharjah, Ras Al Khaimah and Ajman have also announced restriction on movement of workers to and from other emirates.

Dubai’s Covid-19 Command and Control Center have also announced the UAE’s first full genome sequencing of the Covid-19 virus. The successful sequencing of the virus from a patient in Dubai was performed by researchers at the Mohammed Bin Rashid University of Medicine and Health Sciences (MBRU).